Home > Blog > WordPress the Most Popular CMS Among Top 100 Blogs

WordPress the Most Popular CMS Among Top 100 Blogs 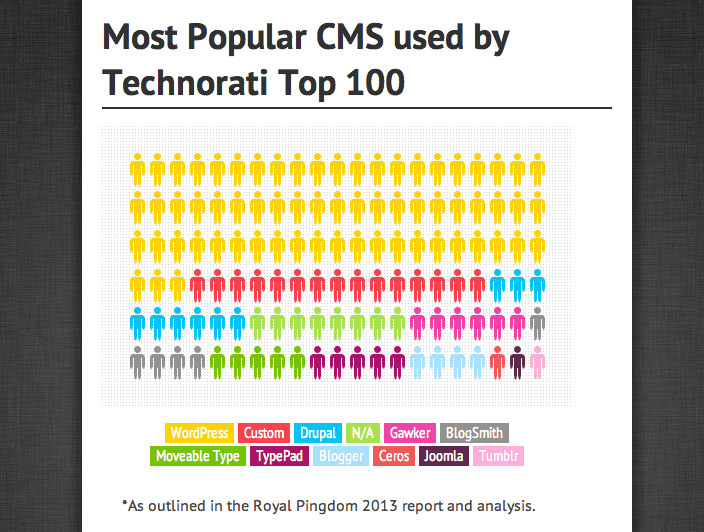 If you needed any further proof that WordPress is the most popular blogging platform among the blogosphere’s biggest and brightest, here it is.

According to website monitoring leader Royal Pingdom, “WordPress is strengthening its position as the dominating blogging platform or Content Management System (CMS) used by the world’s top 100 blogs”. Pretty impressive stuff for a humble, open-source platform which is only now on the brink of its 10th anniversary, right?

As illustrated in Royal Pingdom’s annual study and subsequent report, WordPress is currently used by 52% of the world’s top blogs – which is up from 48% in 2012 – demonstrating WP’s position as a global CMS giant is only strengthening. Namecheap also wrote a comprehensive article outlining the many reasons why WordPress is a great choice for many sites.

Contents show
1 So what exactly is this study based on?
2 52% of Top 100 blogs on the WordPress platform

So what exactly is this study based on?

Essentially, Royal Pingdom works off Technorati’s list of the most popular blogs around the world, and use these as a benchmark to measure overall trends in the popularity of different content management systems, including WordPress, Drupal, Gawker, BlogSmith, Moveable Type, TypePad, Blogger, Ceros, Joomla, Tumblr, and custom CMS.

Founded as the first blog search engine and now regarded as the leading blog directory on the web, Technorati indexes in excess of one million blogs and has become the definitive source on the authority and influence of blogs, as well as who and what is most popular in the blogosphere.

The Technorati Top 100, ranked by Technorati Authority, lists the top 100 blogs in the world and is updated daily. Blogs frequently included in the Top 100 list include Gawker, The Huffington Post, TMZ.com, Mashable, MacRumours, and Jezebel, and indicate each blog’s category and change in ranking.

Royal Pingdom took Technorati’s March 20, 2013 Top 100 list and tried to identify which blogging platform or CMS each of the sites listed is using. Out of those top 100 blogs, Royal Pingdom was able to identify the CMS used by 94 of those sites – and compiled a breakdown of the statistics.

WordPress was overwhelmingly recognised as the most popular platform, and identified as the CMS for the following (March 20, 2013) Top 100 blogs. Be sure to check them out for some inspiration regarding what can be done using the WordPress platform to create a hugely successful site.

This year’s results show a substantial increase in the number of Technorati Top 100 blogs on the WordPress platform, as opposed to just 27 percent in 2009.

For a closer look at the breakdown, you can check out Royal Pingdom’s original graphic illustrating this year’s results here. Like the graphic used in this post? You can create your own using Infogr.am.