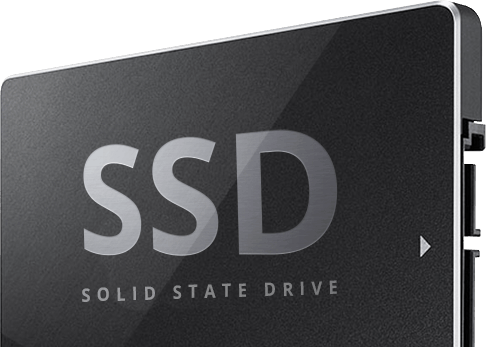 If you can afford to go with SSD hosting you’d be well advised to take advantage of the option. Like the desktop PC world, SSDs are becoming more widely available in web servers for the same reasons – they are faster and break down less.

With no physical drive to spin memory can be accessed and written to faster and they don’t suffer the same mechanical failures. SSDs alone won’t make your site faster, you also need to optimize your application and media, but if you want to make sure your site runs as fast as possible then SSD hosting is a must.

The current shift away from hard disk drives (HDD) to solid-state drives (SSD) is changing the way that PCs and hosting companies approach storage. SSDs became the standard in PCs in 2018, and it’s clear that users are drawn to the benefits of these faster, smaller drives.

What is Solid State?

Traditional HDDs use a collection of metal plates with magnetic surfaces and a read-write arm to transcribe and retrieve data. SSDs rely on a series of flash memory chips that may be mounted inside a case, on a PCI card or directly onto a computer’s motherboard.

The growing demand for SSDs has led manufacturers to begin including them in larger laptop and PC models in addition to slim devices such as ultrabooks.

Servers with SSDs boot quickly and exhibit superior performance thanks to the fact that SSDs don’t have to physically retrieve data. This benefit also makes slow retrieval due to fragmentation a thing of the past and eliminates the need for lengthy defragmentation processes.

Having no moving parts means that SSDs last longer than HDDs, although the memory chips do eventually wear out after a given number of data rewrites.

Overall, however, SSD hosting delivers greater reliability. They’re much less subject to physical damage and can survive incidents such as rough shipping conditions or being dropped accidentally without losing data. This is why you’ll find most managed WordPress hosting companies use SSDs exclusively.

The size of HDD plates means that there’s a limit to how much storage will fit into one unit. As flash memory chips get smaller, SSD hosting will be able to deliver higher capacity in the same amount of space. This holds promise for both PC users and SSD hosting companies looking for more storage and better performance at a price that’s accessible to the mass market.

The faster loading speeds that SSD hosting provides is one of the main reasons why users are starting to seek web hosts that use these types of drives for storage. Shared WordPress hosting or large VPS hosting environments are particularly susceptible to performance issues since a large number of sites must draw resources from a single server at the same time.

SSD hosting can significantly reduce page load times for sites using CRM platforms such as WordPress and deliver the speed necessary to support e-commerce sites. The durability of the hardware offers superior data protection over HDDs, providing the peace of mind users need when trusting their files to a remote server.

Prices on SSD hosting has already begun to fall thanks to growing popularity and consumer demand. Manufacturers are responding to this desire for faster performance and expansive storage by experimenting with how much flash memory can be put in one unit.

According to Network Computing, SSDs may surpass HDDs in capacity by 2016. Drives with as much as 30 terabytes of space are being developed, and it’s only a matter of time before this kind of technology makes its way to consumers via PCs and shared SSD hosting environments.