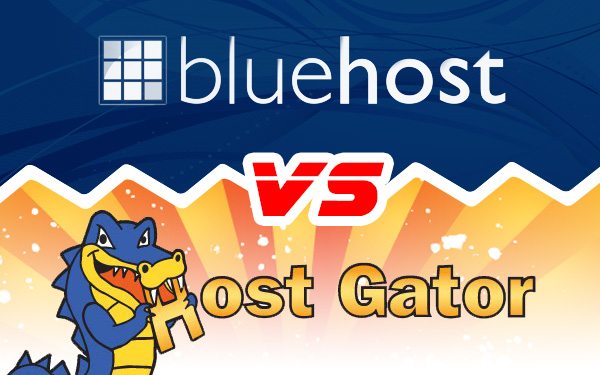 Bluehost and Hostgator (both owned by EIG) are two of the most popular hosting solutions out there.

But popularity isn’t the best metric on which to base your choice of hosting company. Instead you want to take into account their ease of use, page speed, uptime, features, customer support, and pricing to make an informed decision.

In this article, we’ll conduct a four-step comparison of Bluehost vs Hostgator to help you pick the right web hosting provider for your website based on our testing results. We’ve previously compiled thorough reviews of both Bluehost and Hostgator which are worth a look too.

Disclosure – This page contains affiliate links which means we earn a commission if you click through and signup. This is at no extra cost to you and simply helps us maintain this resource for all webmasters’ benefit. We own and pay for all the hosting accounts we use in our reviews and performance testing. Read our full disclosure statement here.

For the purpose of this head-to-head comparison of, we signed up with Bluehost’s Basic Plan and Hostgator’s Hatchling Plan which are the cheapest entry level plans offered by each host.

One of the first things you’ll need to compare when deciding between Hostgator vs Bluehost is technical performance. Specifically, how easy is it to get everything set up, which web host is the fastest, and which one delivers the best uptime.

Bluehost makes it incredibly easy to sign up and get started. Provisioning is instant around the clock. Bluehost has partnered with Mojo Marketplace to take the heavy lifting out of WordPress installation though, for some users, it might be more confusing than the traditional cPanel installation wizard.

Provisioning with Hostgator is instant. In addition to cPanel, you also get access to the traditional WordPress installer which makes it easy to get set up in no time.

The provisioning and WordPress installation experience is pretty easy and straight forward with both hosting providers.

Our performance testing of Bluehost revealed excellent results and consistent performance over the last 6 months. The average user load time remained under 1 second up to 100 concurrent users (0.928 seconds to be precise). In addition to this, no server request failures were recorded.

Our latest performance testing of Hostgator on Load Impact revealed good results. Though the test didn’t get off to a good start, the test site’s performance quickly improved even though the number of concurrent users on the site was on the rise. The average user load time remained under 1 second up to 100 concurrent users. The end result of our latest test showed Hostgator with an average page load time of 0.643 seconds.

Both Bluehost and Hostgator deliver consistent performance and excellent average user load times, but in our latest testing Hostgator does get a lower average page load speed over the duration of the load impact test. Though in fairness to Bluehost the difference of 0.285 seconds would not be noticeable to most people.

Which is faster and has better uptime? Bluehost or Hostgator?

We have been monitoring test sites on both Bluehost and Hostgator for more than a year. These figures represent the performance of these sites in the past month.

Bluehost scored quite a bit better in our Pingdom tests with an impressive YSlow grade of 88 for an out-of-the-box installation of WordPress. It consistently scored under 1 second in Pingdom’s average homepage speed tests compared to a less than impressive 1.82 seconds for Hostgator which is nearly a second slower than Bluehost according to Pingdom. In contrast to to the close finish in the Load Impact tests, this is a significant difference and would indeed be noticeable.

Here’s a quick breakdown of the technical specs and features you can expect from Bluehost vs Hostgator:

With Bluehost, you get a free domain name, access to their proprietary caching solution, daily automatic backups, and ability to create a staging site.

However, Hostgator will migrate your site over to their servers free of charge in addition to offering features like automatic malware removal, support for all CDNs, and unlimited email accounts. 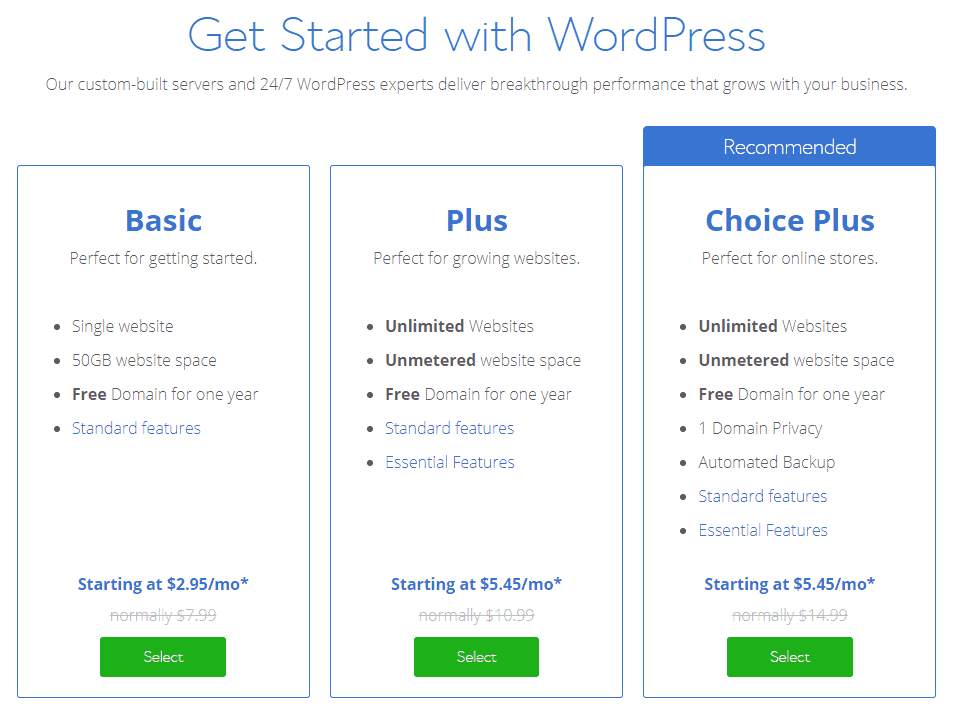 For this hosting comparison, we signed up with Bluehost’s Basic plan which starts at $2.95/mth. This comes with a 30 day money back guarantee.

For the purpose of this hosting comparison, we signed up for Hostgator’s Hatchling Plan which starts at $3.82/mth. Hostgator offers a 45 day money back guarantee.

One of the reasons Bluehost is the go-to hosting solution for many WordPress users is that they offer 24/7 live chat and phone support. In addition to this, customers can also submit support tickets or access their knowledge base.

Hostgator also offers 24/7 live chat and phone support. However, Hostgator does have a lot of negative reviews in its online forums. Hostgator customers can also watch helpful video tutorials for information.

Both Bluehost and Hostgator offer the same level of customer support.

Based on performance, page speed results, and features, we’d recommend going with Bluehost. You can expect excellent (and consistent) performance from Bluehost in addition to speedy page load times thanks to their proprietary caching solution.

In addition to this, Bluehost gives you the option to set up a staging site and lets you opt-in to automatic WordPress updates. It’s also worth mentioning that Bluehost is officially recommended by WordPress.org.

Although Hostgator hosting plans come with neat features (like free site migrations and malware removal), we think Bluehost is the overall winner in terms of performance, page speed, uptime, and price.

Comparing Bluehost vs Hostgator comes down to performance, page speed, and features.

Although both hosting providers delivered 100% uptime, Bluehost was the clear winner with impressive, consistent performance and an average home page loading time of under 1 second.

So that is our assessment, which hosting provider are you leaning towards and why? Share your thoughts in the comments section below.

One thought on “Bluehost vs Hostgator”